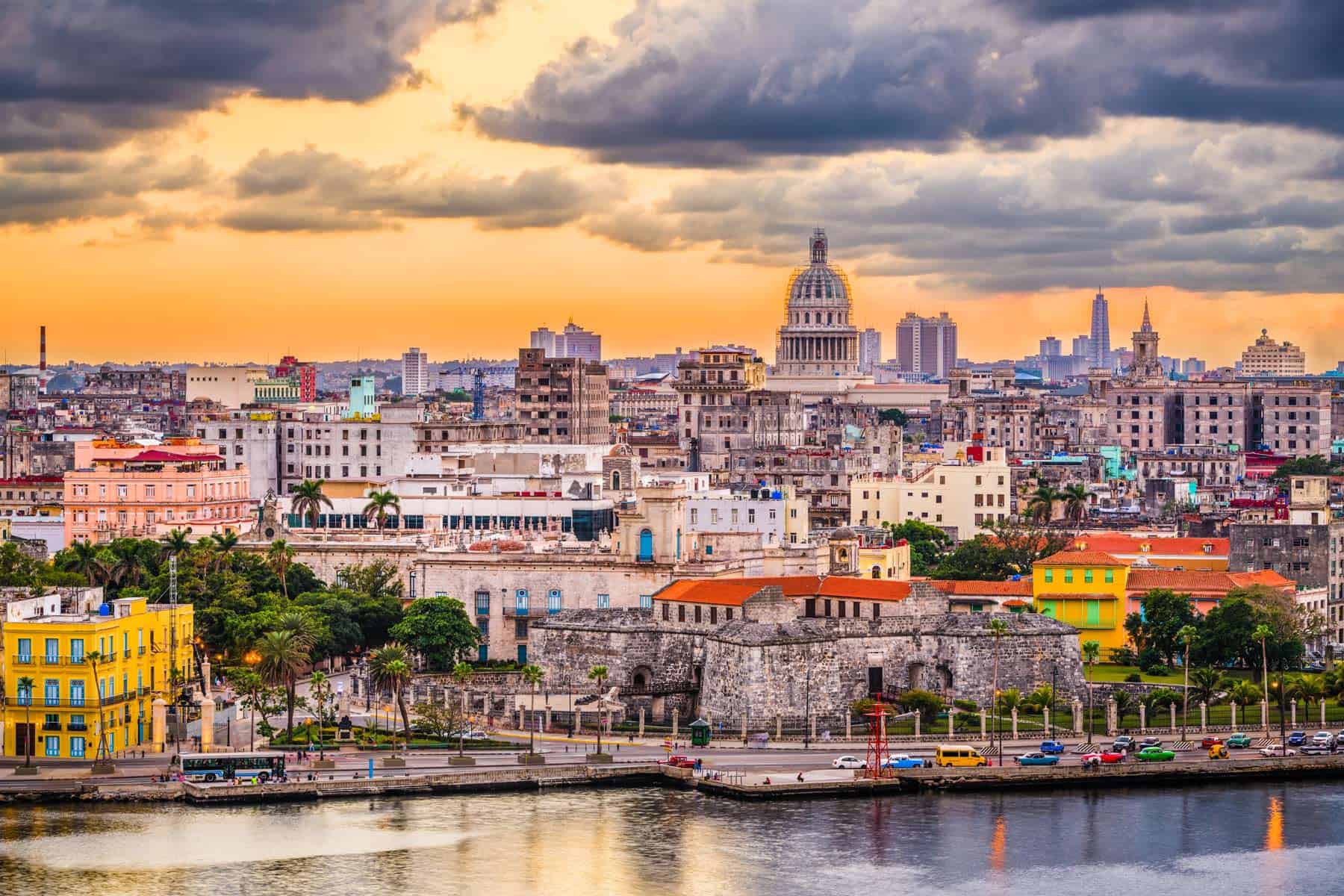 Havana is the capital city of Cuba, a beautiful city, full of history and charm, and an endless number of touristic places in all senses of the word.

It’s the most populous city of the country and the third most populous in the Caribbean. It has admirable architecture, and a unique and warm environment.

The Cuban capital’s history starts on November 16th, 1519, when under the ruler of the Spanish Diego Velázquez de Cuéllar the city was founded. It was first named Villa San Cristóbal de La Habana (Saint Christopher of Havana village) and it was the sixth village founded by the Spanish Crown on the island.

The first mass was celebrated in Plaza de Armas where nowadays the El Templete monument and the silk-cotton tree are preserved. The first town council of the village was located there.

Afterwards, it became a target to pirate attacks, the reason why it was subjugated since it was an important commercial settlement, because it had a privileged location and a wide bay.

The Spanish Crown decided during the first years of the XVI century to build a series of fortification along the bay. This was one of the most relevant measures and it allowed it to become the port for the mooring of ships that would head to Spain directly after.

First constructions in the capital

The constructions built during the XVI century were the Fortaleza San Carlos de La Cabaña (Saint Charles of the Cabin Fortress), which was the most expensive building work funded by the Crown outside Spain; other constructions were the Castillo de los Tres Reyes Magos del Morro (Three Wise Men of the Morro Castle), the Castillo de la Real Fuerza (Royal Army Castle) and the Iglesia de San Francisco de Asís (Saint Francis of Assisi Church). All of these are still preserved and they stand as symbolic buildings of the city.

Later on, in 1592, the village received the city title conferred by King Phillip II of Spain, becoming the most important city in South America.

The British showed their interest in having control over Havana, so they decided to attack Havana in 1762 and got full control of the city and its port for a period of eleven months, having total access to its properties.

The Spanish wanted Havana back, so they got to an agreement with the British putting end to the British control over Havana. The Spanish gave away Florida in exchange for Havana.

Trade developed significantly during this period; it was called the city’s golden century, so new buildings, squares and theatres started to be built; also the first railroad was built and the streets were beautified.

Other important constructions were those that were carried out by the Americans when they took control over the island in 1902, and an example of them is the luxury National Hotel of Cuba.

Since it’s the capital of Cuba, you will find in it all the foreign representations in the country such as embassies, consulates and other offices.

Location: In the west of Cuba, limits to the north with the Strait of Florida, to the east with Mayabeque, to the west with Artemisa and to the south with part of both of these provinces.

Pseudonym: the capital of all Cubans.

How to get to Havana?

The ways to get to Havana are varied depending on where you are. If you are out of the country the ways to arrive in the city are by plane landing at José Martí International Airport, or travelling on a cruise that has a stop in the city or arriving in a ship of your own.

But if you are somewhere inside the national territory there are different ways to get to Havana such as train, bus, plane or private vehicle.

The Central Train Station is near the port on Arsenal Street.

On the other hand, on 26th Avenue, between Zoo Avenue and Ulloa, in Nuevo Vedado, you can find the National Bus Station.

José Martí Airport (HAV) has 5 terminals:

Due to the increase of the number of tourists that visit the island yearly, terminal 3 has received a great traffic of people in the last two years.

Foreign tourists coming from Europe and Canada are among the highest level, especially those who come from Spain, Germany and France.

Although we also received a great number of tourists coming from Argentina, Chile, Ecuador, the United States and more countries.

There are various websites where you can check out cheap flight offers to Havana.

Also, many people from Spain come to Cuba monthly to gaze at the beauty, charm and warm environment of the Cuban capital. Some of the most popular routes are:

What to do and what to see in Havana?

In this city there is no place for boredom, even if you’re travelling for a couple of days or for a longer period.

There’s something for sure, some places are must-visit if you want to know closely the true essence of the Cuban people.

Every place you visit and every story you hear will be added to this unique experience of travelling to the capital of the biggest island of the Caribbean Sea.

Then, what can we do in Havana? The first thing is that you will be able to contemplate a city full of history and with a fascinating idiosyncrasy.

But anyway, we will recommend you next a whole list of the activities you can do during your visit.

You really can’t miss going sightseeing around the oldest part of the capital, Old Havana, which was declared Human Patrimony by the UNESCO.

You’ll be able to appreciate the charm of great works of ancient and colonial architecture such as buildings, fortresses, churches, hotels, houses and restaurants.

Enjoy a walk down Obispo Street while you run into living statues, handicraft, live music, some shops and more attractions.

Don’t leave before you have tried a delicious and hot Cuban coffee you can enjoy in Old Havana Square, where you can find a lot of bars and restaurants.

In this zone there are lots of must-visit places where it is essential to stop and visit:

In the capital of all Cubans you can also enjoy a fascinating walk around the waterfront, especially at home, a time when people of all ages gather.

You’ll be able to contemplate the good vibes from the groups of youths, artists, lovers, the sea breeze and many other attractions.

The waterfronts have a length of about 8 km, an end starts in Old Havana and the other finishes at the entrance of the Miramar residential zone.

On the other hand, you must visit the Capitol, which is one of the Havana’s icons when it comes to architecture.

Other places near to the Capitol and with a great touristic and historical interest are the Great Havana’s theatre (El Gran Teatro de La Habana), the Fraternity park (Parque de la Fraternidad) and the Central Park (Parque Central).

Another visit you may enjoy is going to the Cuban Art Factory (Fábrica de Arte Cubano), which is located in an old building in the Vedado, where you can find a great variety of contemporaneous works, this will be a tremendous display of culture that you will appreciate.

In general, you can take a walk around the city and appreciate every corner, building and piece of history wherever you head.

And if you have enough time, take a chance and go to at least one of the beaches of Havana, like those that are located to the east, such as Bucaranao, Tropico , Megano, Santa Maria del Mar, Boca Ciega, Guanabo, Jibacoa.

Around the city there are plenty of options you can choose from to find lodging, like hotels and hostels if you’d like to experiment closely how living in Cuba is like.

There is lodging for all preferences and economies, since it is an often-visited city by millions of tourists a year, each one of them with different economic situations.

Hostels in Havana can be private houses and individuals, we mean, with an independent door where the tourists get their own key given by the host.

They can also be apartments or a private space within the house which includes its own bathroom and kitchen.

Others can be luxurious and spacious houses including sometimes a pool and other facilities for a long or short stay.

In this way you can also lodge with family, in a room, living and sharing with the other members of the family who live there.

The ideal is to check trustworthy websites and agencies to choose among the many options where you can stay.

Hotels in Havana are other choices to lodge, but since they are hotels located inside the city they are more expensive than the private houses.

They are distributed around different zones of the capital; the one you’ll choose will depend on the experience you’d like to live or how close from the places you want to visit they would be.

For those who prefer a destination with a beach included, it is best to incline to the accommodations located in Miramar.

Where to eat in Cuba capital?

In the same way, the capital is full of places where you can enjoy the good flavor of traditional and creole Cuban cuisine.

On your way around the city you will find an endless number of options which are multiplying due to the increase of tourism on the Island.

You’ll be able to try different kinds of cuisines, from national to international, where you can find Russian, Italian, French, Chinese, etc.

Among the most popular restaurants we can mention:

In time, others will be added to the list of the ones of great demand by visitors that come from all over the world.

Chinatown has also a vast variety of establishments that offer excellent services.

The weather in Havana Cuba

Havana’s weather is usually hot and sunny, although it can be a bit cold during the winter months.

During those days it can also be windy, especially near the waterfront, but in general this is a beautiful and perfect city to visit with no climate setback during the 365 days of the year.

The time in Havana province is the same of the UTC-5 zone. We will list below the time difference this city has related to the main cities of the world.